I am on Draft Three of this doodle, initially sketched while watching a video by a rather dedicated abstract expressionist/colorist artist. Just decided to riff on something he showed, and my own quick response to it, and to his ideas. I have digital variations of photos of the first two drafts, and have a high resolution scan of draft three, which includes colored pencil in addition to graphite.

This is all just playful to me, with no hidden meanings emerging. But what fun!

I have refined my watercolor collage sketch a bit, rescanning and working with digital variations. Sometimes I spend a long time in my chosen manipulation software in order to make my transformations and enhancements. It is not always easy or quick selecting the desired sections of an artwork, and this especially true with watercolors that may bleed into each other, and on textured paper where shadows create variations our eyes and brains will generally ignore!

So in addition to working the original a bit, I have tried light and dark as the background frame, and applied different digital manipulations on the trees separated from the window and shadows.

This has changed a bit in the final version. It is now darker and more complex with the addition of more watercolor and subtle collage elements. It is now time to stop, and to declare it finished!

The scan of the original is on the left. As you can see, it is fairly dark and subtle in color. But since I do enjoy drama as well as subtlety, I have created two digital variations. These are included to the right of the original 10″ x 10″ x 1″ collage on wrapped panel.

Sometimes a piece comes together quickly, or at least the basic essential work is clear early on, even if final touches take longer! But at other times, the first couple of versions bear very little resemblance to the final work, although some original forms & colors may still be visible. This piece has transformed several times, and may or may not be finished!

The light blue waterfall with the spidery black hole is the current version of the original acrylic painting, 8″ x 10″ on black canvas, scanned. This is the draft #8; I quite like it at the moment so it may be the final version. The rather garish multi-colored image at right is, of course, a digital foil of draft #8, and a somewhat more subdued digital foil is in the middle.

Above left is draft #2, very pink and muddy, and followed by draft #4 (dark blue and very streaky and busy). I don’t like either of these, or other intermediate drafts.

So in the current version at top the open circle all but disappeared, and most of the original colors are completely covered up… so it goes!

Wanting to work on a black background, which can be tricky, then using acrylics (not really my medium). Liking this one, not so much the digital at left. But having fun!

Above is a 10″ x 10″ block wrapped in a pre-printed paper. I have worked over this with ink. I like the earlier version best, so I will have to keep working to “fix” it to a better balance… so it goes!

Below is more of the same paper, worked with ink, and layered/collaged onto a wooden plaque. The original is in the center, with digital variations on either side

Working on black for both of the works above: at top is acrylics on an 8″x10″ wrapped canvas, and below it is a 11″ x 14″ black art board, worked with mixed media, including pastel, colored pencil, pen, and acrylic paint! Of course the versions on the right are the digital variations that I cannot resist!

Further color work was needed on this drawing in order to regain a balance, both for the original and the generated pattern. The latest, final? drawing is in the lower left.

Very unusual weather conditions in Port Townsend: many inches of snow over the past week, with serious accumulation on the ground. Schools closed, grocery stores full, but few cars on the neighborhood streets that are not getting plowed of course. I am loving it, and have been taking long slow 2-3 hour walks the last three mornings, just rambling and taking photos. Also stopping in for Elevenses at coffee shops when feasible!

And I just can’t resist working up digital transformations of many photos, after I get home. Some are just for fun, some look better unaltered, but some are magic!

I don’t really like me blue skinned, but … well it is interesting! 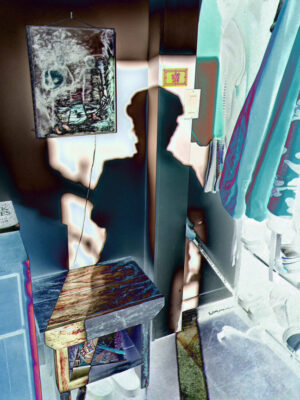